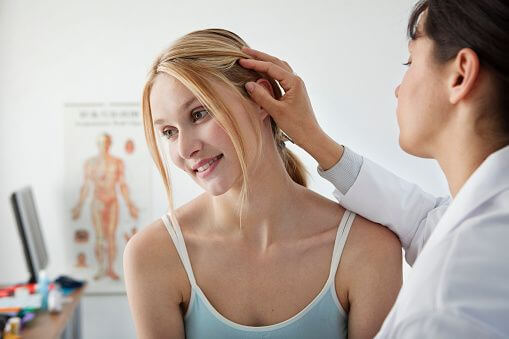 Almost every second German over the age of 40 suffers from visible hair loss. But there is also an increasing number of young people who find their hair line receding and bald areas being formed. Besides genetic and hormonal reasons this is often also caused by our modern lifestyle. Stress, environmental influences, an unbalanced diet and cigarette smoke can have a negative effect on hair growth.

Anyone who wishes to promote natural hair growth and at the same time strengthen weak hair needs to literally go to the root of the problem and that is exactly where the scientifically tested method of treatment with thymus peptides can be used to obtain natural, healthy hair without side effects.

We spoke with the scientist and peptide expert Dr. Mimoun Ayoub about the special effect of thymus peptides on hair loss.

Dr. Mimoun Ayoub about the special effect of thymus peptides on hair loss

Dr. Ayoub, can you explain what thymus peptides are and what their task is in the body?

DR. AYOUB: Yes. This is not new knowledge but most people affected by the condition are still unaware of it. Thankfully this situation has improved somewhat in recent years. There are now numerous independent studies and observation studies on the effect of thymus peptides in cases of hair loss. Thanks to the large number of sound studies on this topic more and more doctors are also recommending preparations with thymus peptides.

This research has shown that thymus peptides have a regenerating and strengthening effect on hair follicles and thus specifically on the structures in the scalp that surround the hair roots and anchor the hair in the skin. Thymus peptides improve cell nourishment to the hair follicle, which supports the formation of new hair cells and thus substantially extends the growth phase of the hair. This functional principle is responsible for the very good results, which can be achieved predominantly with an innovative thymus peptide ingredient.

What distinguishes this active ingredient?

DR. AYOUB: This special form of the thymus peptide ingredient is an integrated reproduction of natural thymus gland extract in its peptide structure – a so-called biomimetic approach. Biomimetics is a young science at the interface between biology and technology.

The basic idea of biomimetics is to learn from nature and use it as an example for the development of active ingredients. Correspondingly the thymus peptide ingredient that is termed GKL-02 contains numerous compounds that are based on the structure of natural thymus gland extract. Thus the positive effect is not assigned to individual peptides but rather it is the case that the multitude of peptides develops a synergetic effect that is similar to that in nature.

We can imagine the function of this kind of so-called signal peptides in simple terms like our use of a light switch. Each of these signal peptides has a specific task, so that GKL-02 plays a key role, among other things, in the activation of the keratinocytes that have a decisive influence on the physiological growth of hair.

Today the patented GKL-02 thymus peptide ingredient can be manufactured in the laboratory in a special procedure and this is done without using animal components.

What is the difference to prescription medication?

DR. AYOUB: Some of the medications that are often prescribed in cases of hair loss have the desired effect but this is frequently also accompanied by substantial side effects such as headaches, itching and increased blood pressure. Thus the recognition that the use of thymus peptides helps in cases of hair loss was also a small medical revolution.

Thymus peptides, on the other hand, are organic compounds that are also produced by the body itself. They are absorbed by the hair follicles, thus strengthening them. This is a natural, biological process that happens automatically in most people while they are young. It is only when the hormonal equilibrium is disturbed, because of age or external influences such as stress, that the body can no longer supply the hair follicles sufficiently. It is then possible to use thymus peptide preparations to help with all types of hair loss. Thymus peptides thus represent an effective alternative to chemical treatments without side effects.

Does the use of thymus peptide require medical supervision?

DR. AYOUB: No. This thymus peptide preparation is available from the chemists without a prescription and is free of side-effects.

Thank you, Dr. Ayoub, for this conversation