A time of change – hair loss during menopause 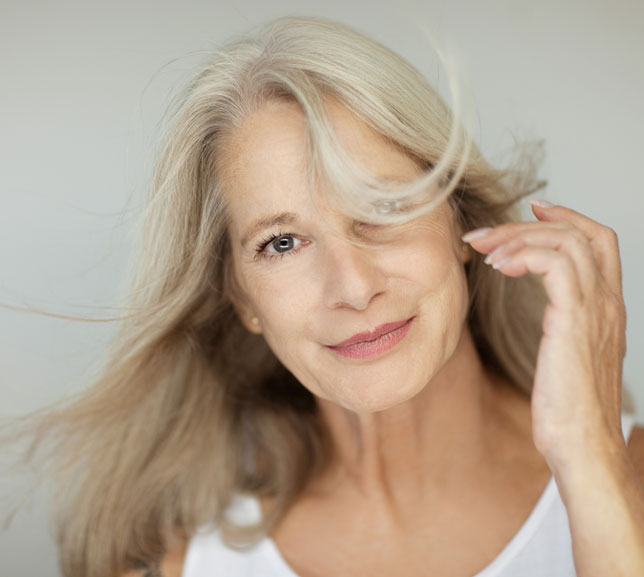 A woman's body undergoes numerous changes in the course of its life. First, she matures from a child into a girl. Puberty commences; the girl matures into a woman. In the course of her fertile years, she blossoms and grows. But with the onset of menopause and the start into the second half of her life, the body adjusts to a life whose central focus no longer consists of reproduction.

As so often, the processes that happen during this time are controlled by hormones.

The cycle of a woman

Two hormones play the main roles in the female cycle: Estrogen, which predominantly plays a role in the first half of the cycle, and its "partner", progesterone. Even though they are responsible for the female cycle, both hormones are not entirely "female" hormones. They are also formed in the male body; however, in other places and amounts. Estrogen initiates the first phase of the female cycle until ovulation. Under the influence of the hormone, a follicle matures in the fallopian tubes; if a pregnancy occurs, it will implant into the uterus.

Progesterone in the second half of the cycle

If ovulation has occurred, progesterone ensures that the body prepares everything for an impending pregnancy: The uterine membrane layer thickens and its circulation is activated to provide an optimal blood supply to the baby in the event of successful fertilization. The interplay of estrogen and progesterone enables a smooth biological process for successful reproduction.

Menopause – things get slightly mixed up ...

For women, menopause means a major life change. Regardless of whether she wants children or not, everything works differently in biological terms after menopause. It makes sense that things can get a little rough – both physically and emotionally – when the accustomed biological program is again completely rewritten. The accustomed processes change between the two hormones estrogen and progesterone too, and this well-practiced team may stumble a little...

Hormonal problems as the main reason of hair loss in women

Women suffer from hair loss more and more frequently. Uncertainties are often great, especially since the problem can become an everyday issue. It is a fact that hormonal variations often result in short-term or permanent hair loss. Estrogen, for example, participates in regulating the growth cycle of hair. When estrogen levels drop, this growth cycle shortens, and hair loss may result as a consequence.

Estrogen deficiency or excess? Both can cause hair loss

Menopause is not the only cause

Similar hormonal variations to those caused by menopause also develop in women who have had their ovaries removed for health reasons or who have had a hysterectomy. In all of these cases, the hormonal balance is disturbed to such an extent that the consequences can be visible in the form of hair growth problems and hair loss.

How can Thymuskin help?

Causes of hair loss should be thoroughly clarified; if they are not corrected, the problem will be difficult to solve completely. As a supplement to causative therapy, Thymuskin assists in several ways with all types of hair loss: It inhibits the enzymes responsible for hair loss and helps to improve hair condition in the long run. It acts directly at the roots of the hair, where the hair life cycle begins, and contributes to their regeneration and to extending the growth phase. It activates the development of hair cells in the hair matrix, thereby stimulating new hair growth.

You should also try to handle menopause in the most relaxed manner possible, since stress and worries can intensify signs and symptoms in such life phases.